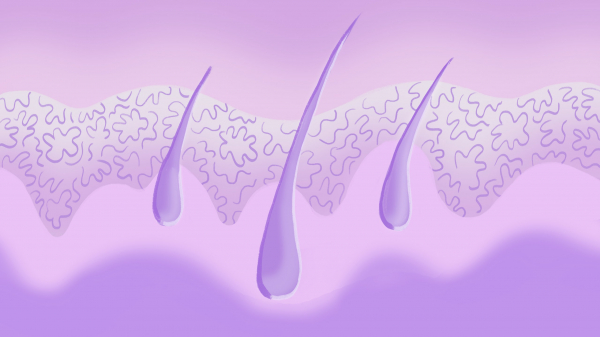 This story is a part of The Truth About Hair Loss, an exploration into why we lose our hair, the emotional and monetary costs that come along with the experience, and what the future of treatment (and acceptance) could look like.

In January of 2021, Kristyn Wells sat on her couch at home and recorded one of her most vulnerable videos. She started a YouTube channel while in quarantine during COVID-19, initially sharing fitness and lifestyle tips. But the video she posted on January 29 was different. Wells decided to share her hair loss journey with the world for the first time.

More than halfway into the 10-minute video, she removes her scarf to reveal a patch of baldness along the top of her head.

What follows is a few deep breaths as she adjusts to the reality of full exposure. Finally, she says, "I did it. I did it."

Wells was diagnosed three years ago with central centrifugal cicatricial alopecia (CCCA) by a board-certified dermatologist in Columbia, South Carolina. "I had never heard of it before," says Wells of the condition. "Ever."

What is centrifugal cicatricial alopecia?

CCCA is a type of hair loss that starts at the crown of the scalp and spreads outward. Cicatricial comes from the Latin word for scar, which presents in CCCA as permanently damaged hair follicles that have been replaced by scar tissue.

Symptoms of CCCA, which include itching and/or burning of the scalp, and noticeable broken hair in the crown area are usually mild at first, explains Ife Rodney, a board-certified dermatologist in Fulton, Maryland. This usually begins to happen when patients are in their early 30s, she says, though she's seen women in their 20s come in for CCCA treatment as well.

When Wells noticed gradual thinning of her hair in her early 30s, she always assumed she had "female pattern baldness," also known as androgenetic alopecia, a condition that runs in her family.

In its early stages, CCCA can be misdiagnosed as androgenetic alopecia because they can look very similar, with thinning in the crown area of the scalp, says Yolanda Lenzy, a board-certified dermatologist in Chicopee, Massachusetts.

To ensure an accurate diagnosis, Lenzy performs a biopsy, where a pathologist can then see the hair follicles up close. Whereas androgenetic alopecia is characterized by shrinking of the hair follicles resulting in thin, barely noticeable hair, the key indicators of CCCA are inflammation and damage to the follicles.

"When you look at it, you can see the scarring," says Lenzy. "There are no openings. There are no pores."

CCCA is the most common form of scarring alopecia in Black women, says Rodney. The exact cause is unknown, though it has been associated with certain hairstyles and hair care practices that are common among Black women, such as chemical relaxers and extreme tension from braids, sew-ins, and locs, which may trigger scarring in the crown area and lead to hair loss, she explains.

Rodney points out, however, that some women, and even men, who have never subscribed to harsh hair care practices or tension-heavy hairstyles still get CCCA. Increased research into CCCA is revealing that "there is a definite genetic component of risk for the condition," says Amy McMichael, a board-certified dermatologist in Winston-Salem, North Carolina.

"For those of us who see many women of color with hair loss, the clinical patterns seem to suggest that CCCA is quite common in families," she tells Allure.

McMichael, who chairs the dermatology department at Wake Forest Baptist Medical Center, was one of the primary investigators of a study into CCCA whose findings were published in The New England Journal of Medicine in 2019. The study concluded that mutations in a gene essential to how the hair follicle forms (PADI3) were associated with CCCA.

Lenzy has numerous family members who have been dealing with this particular form of alopecia for decades, including her mother, several of her aunts, and her sister, Lila Adams. Diagnosed 10 years ago, Adams calls her journey with CCCA a "rollercoaster ride."

"I live with it, and it's a daunting thing to lose your hair," she says. "As a Black woman, hair boosts your self-esteem, it gives you a sense of inner validation if it looks nice."

Adams admits she didn't take the condition as seriously as she should've in the first few years of her diagnosis. It was her mother's CCCA journey – coin-sized scarring that spread to the point where she now depends on wigs for coverage – that spurred Adams into action.

How CCCA Is Treated

Adams's CCCA treatment plan includes the application of prescribed medication to her scalp and regular visits to her dermatologist for progress check-ins. Adams stopped chemically straightening her hair and now rotates her hairstyles, going from protective styles to wearing her natural hair out, in order to give her scalp a break.

There is no cure for CCCA, and it is a chronic condition, says Lenzy. Thus, treating it takes commitment on the patient’s part, in case another flare-up of inflammation occurs.

One thing Rodney stresses to her patients is that when it comes to this condition, time is of the essence. "Your hair follicles are actively under attack," Rodney explains to her patients after diagnosis. "And we need to intervene aggressively now to shut it down and save the follicles." She says when the initial symptoms are overlooked, patients in their 50s and 60s come in with more widespread scarring and advanced hair loss.

Treatment for CCCA begins by stopping the inflammation. Antibiotics with anti-inflammatory properties can be prescribed as well as topical cortisone to be applied to the problematic areas. Steroid injections are also an option for deeper penetration into the scalp, says Rodney.

To improve regrowth of hair in the affected area, Lenzy uses minoxidil, which is the active ingredient in Rogaine. As part of her patients’ overall treatment plan, she also recommends supplements like Nutrafol and Viviscal Pro to aid in the growth and thickness of the hair. Rodney says she's had success with the supplement Lambdapil in her patients’ hair loss treatment. (It's worth noting that research on supplements' efficacy is lacking, and you should always consult a board-certified dermatologist before starting a supplement treatment plan.)

The cost of CCCA treatment is based on factors like insurance coverage and the severity of the condition, notes Rodney. Initial evaluation and baseline treatments to shut down the inflammation like antibiotics, topical steroids, and steroid injections are usually covered by insurance, both Lenzy and Rodney say. More advanced treatments, like platelet-rich plasma (PRP), where platelets are injected into the scalp at the level of the hair follicles to assist in hair growth stimulation, can range from $700 to $1100 per treatment, and require multiple visits, says Lenzy. Additionally, hair growth supplements can be pricey, with Nutrafol costing $88 for a one-month supply.

Lenzy says she's seen a lot of women become defeated after diagnosis, thinking they’ll have to come up with hundreds of dollars for advanced treatment, when they haven't first undergone the initial, and often affordable, steps to combat the inflammation.

Treatment can be a months-long process, where Lenzy and Rodney have found themselves providing patient care that goes beyond prescriptions.

"What distinguishes the good doctors from the great doctors is the counseling," Lenzy explains, adding that educating her patients and setting expectations is key. "Because if they don't know what to expect, and then you give them something and they use it for six months and see no difference, they're going to stop."

The Mental Health Side Effects of CCCA

Lenzy and Rodney, who are both Black women, recognize the strong connection between hair and identity in the Black community.

"So suddenly, when your hair is falling out to the point where you can't wear a hairstyle confidently, it impacts your quality of life," says Rodney. "It's very emotionally stressful. Some of my patients, many are in tears in my office or depressed about it."

Wells originally felt that shame and insecurity in her CCCA diagnosis. That is ultimately why she says it was important for her to be vocal about her hair loss journey on YouTube. Soon after she posted the video, comments poured in from other women who said they, too, had been diagnosed with CCCA.

Having seen hundreds of patients with CCCA over her career, Lenzy says the effort to bring the dermatologic concerns of Black women to the forefront of the conversation often starts with Black dermatologists, who identify most with those conditions.

"It's my passion to use my research in order to elevate our knowledge and the knowledge gaps we still have about this condition," she says. "A lot of patients who went to the dermatologist in the '80s and '90s were told, 'There's nothing that can be done,' and they were sent on their way."

No comments to show.